skip to main | skip to sidebar

Sally Ashton
Poetry: I read it, write it, teach it, edit it, review it, publish it; Etc.

For the time being, I've pulled up my blog posts and moved to A Muse Bouche. I can't remember why I thought a new blog would be an improvement, so now I have blog feet in both worlds. The new one uses my sallyashton(dot)com domain. That must be why I thought it would be good to move.

However, I seem to want to use the new blog more as a website than a blab-fest. I've only posted once in the year since I began it.

In any case, if you followed me here 4 years ago, you might want to dial in to the new blog for now. If you're so inclined. Thanks for your precious time and kind attention.

-sally
Posted by Sally Ashton at 8:43 PM No comments:

While I won't be teaching in Lisbon this summer in the Disquiet International Literary Program, I hope to return in that capacity in Summer 2013. I highly recommend the program to any writer, but will let my former students, the director, below, and the website fill in the details for you. Don't miss the opportunity. In the meantime, follow my antics at www.poetlaureateblog.org where I wear a funny hat until April, 2013, at which time I return to poetry on a stick.


I highly recommend Sally Ashton's workshop experience. Ashton goes beyond providing a constructive and supportive critique environment by also sharing literary themes and supporting text that I found to be thought provoking and inspirational to my writing. Lara Gularte (Disquiet 2011)

In the Lisbon workshop with Sally Ashton, I received thoughtful and relevant critique on my poems. I appreciated Sally's sensibilities as a facilitator and close reader, as well as her impressive knowledge of craft and current trends in literature. The optional short reading and writing assignments she prepared for us tapped into the expanse of emotions we were experiencing as travelers out of our comfort zones and provided focal points for the phenomenal history and culture we found surrounding us.
-Marjorie Manwaring (Disquiet Program 2011)

And now, a word from the director:

Last year's inaugural program was a resounding success, with more than fifty North American writers gathering in Lisbon for workshops, seminars, talks, and frivolity with contemporary Portuguese writers and artists.

This year's program will take place from July 1 – July 13, 2012 and will include workshops in poetry, fiction, nonfiction and translation, literary walks and other excursions, craft talks and readings from North American and Portuguese writers.

The International Literature Award: A full scholarship (airfare, tuition and lodging) is available for the winner of the Dzanc Books / Guernica International Literature Award, judged this year by Colson Whitehead. This multi-genre contest seeks poetry, fiction, or non-fiction that broadens the landscape of North American literature beyond the boundaries of North America. The winning work will also be published in Guernica, one of the best literary and cultural magazines on the web.

Full and partial scholarships are also available through a partnership with the Luso-American Development Foundation for North American writers of Portuguese or Luso descent.

The deadline for contest and scholarships is January 31, 2012.

. . .for the foreseeable future at www.poetlaureateblog.org, where I am in the midst of posting the favorite poems of residents of Silicon Valley where, until April 1, 2013, I am the current Santa Clara County Poet Laureate.

I'm posting all my events on the "Laureate Schedule" page in the header, any comments from time to time can be searched in the Archives under the "Laureate's News" category, and you can definitely find my posts for Best American Poetry made from my time in Portugal in this manner should your interest have been hanging for the past months.

Sorry to have left the 3 of you hanging. (hi Susannah!)

Pass it on.
Posted by Sally Ashton at 1:44 PM No comments:

Work with me in Portugal!

Work with me in Portugal next summer in Dzanc Book’s new international literary program. I’ll be leading a poetry workshop. Check out the website and contact me for registration details. It’s a terrific program and opportunity.

A wonderful review of Some Odd Afternoon posted at Rattle online.
Posted by Sally Ashton at 11:24 PM No comments:

"Sally Ashton is a hoot." That's the best 4 letter word I've ever been called! Check out the Bay Area Poets Seasonal Review online review of my latest book, Some Odd Afternoon, for the rest of the story.

If you're a subscriber to the print version, the full text of the interview also appears in the Spring/Summer 2010 issue.
Posted by Sally Ashton at 1:25 PM No comments: 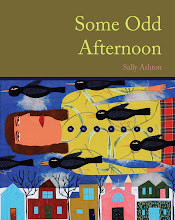 Click on image. Order now or at a reading near you! "Look Inside" at Amazon dot you know.

Her Name Is Juanita. Pushcart Prize Nominee. Click on image to order.

How? Order my chapbook